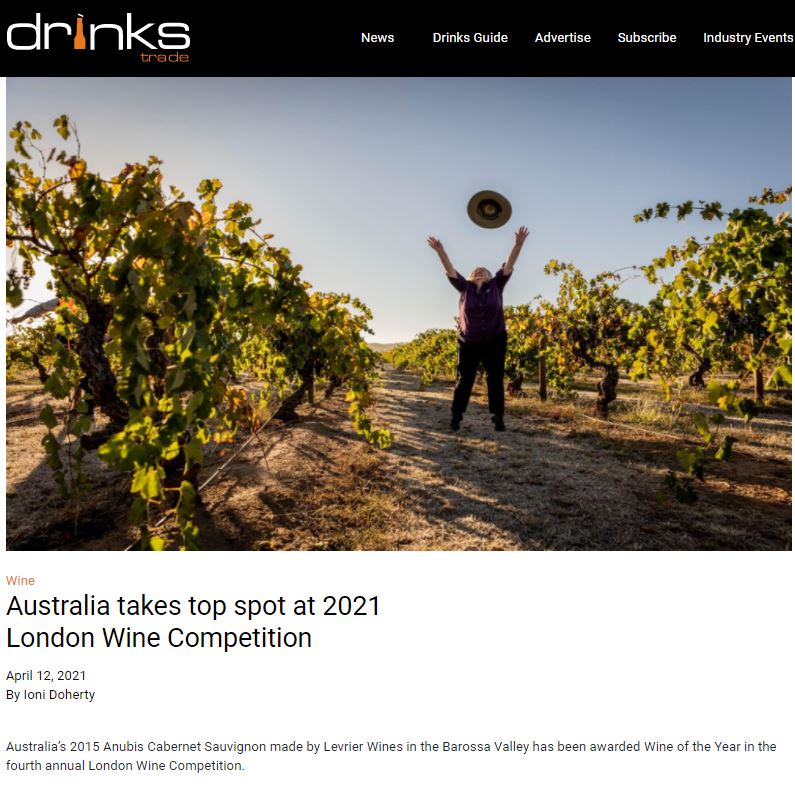 Australia’s 2015 Anubis Cabernet Sauvignon made by Levrier Wines in the Barossa Valley has been awarded Wine of the Year in the fourth annual London Wine Competition. At the 2021 London Wine Competition, products are judged by Quality, Value and Package by some of the world’s leading tastemakers in wine including 14 Master Sommeliers, 14 Masters of Wines as well as some of London’s leading wine buyers. 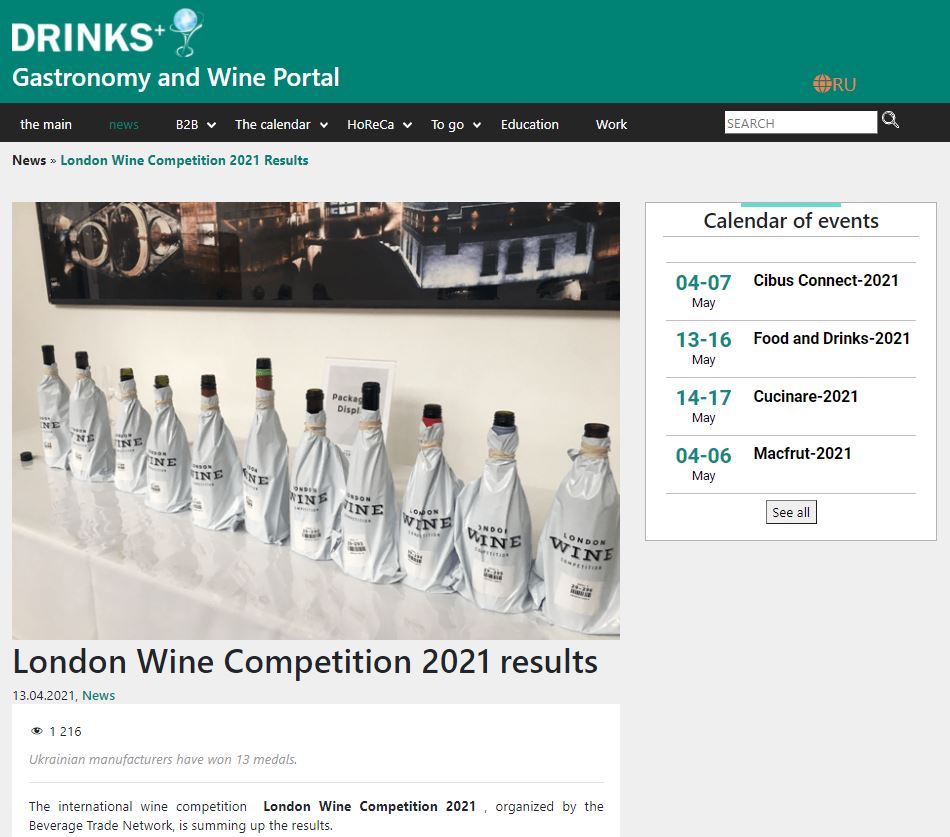 The international wine competition  London Wine Competition 2021, organized by the Beverage Trade Network, is summing up the results. The marks for the competition are based on three main criteria: quality, cost and packaging. To receive a medal, wines must have a high overall rating on all three criteria. This year, representatives from more than 36 countries took part in the competition. 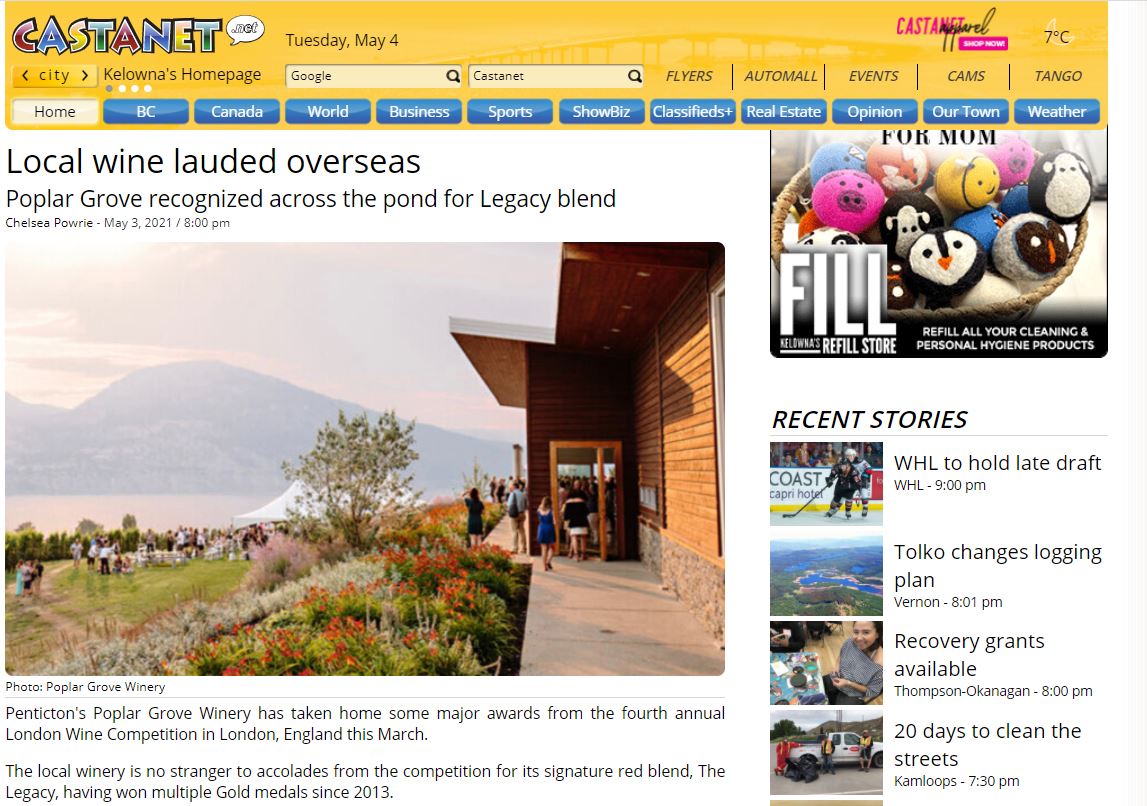 This year, The Legacy was awarded Best in Show by a varietal and a Gold medal with 93 points. The Holler family, owners of Poplar Grove since 2007, say The Legacy begins in the vineyard with their focus on farming. Barbara and Tony Holler and their four sons Chris, Andrew, Matthew and Eric grow the grapes together on their 140 acres of vineyards. 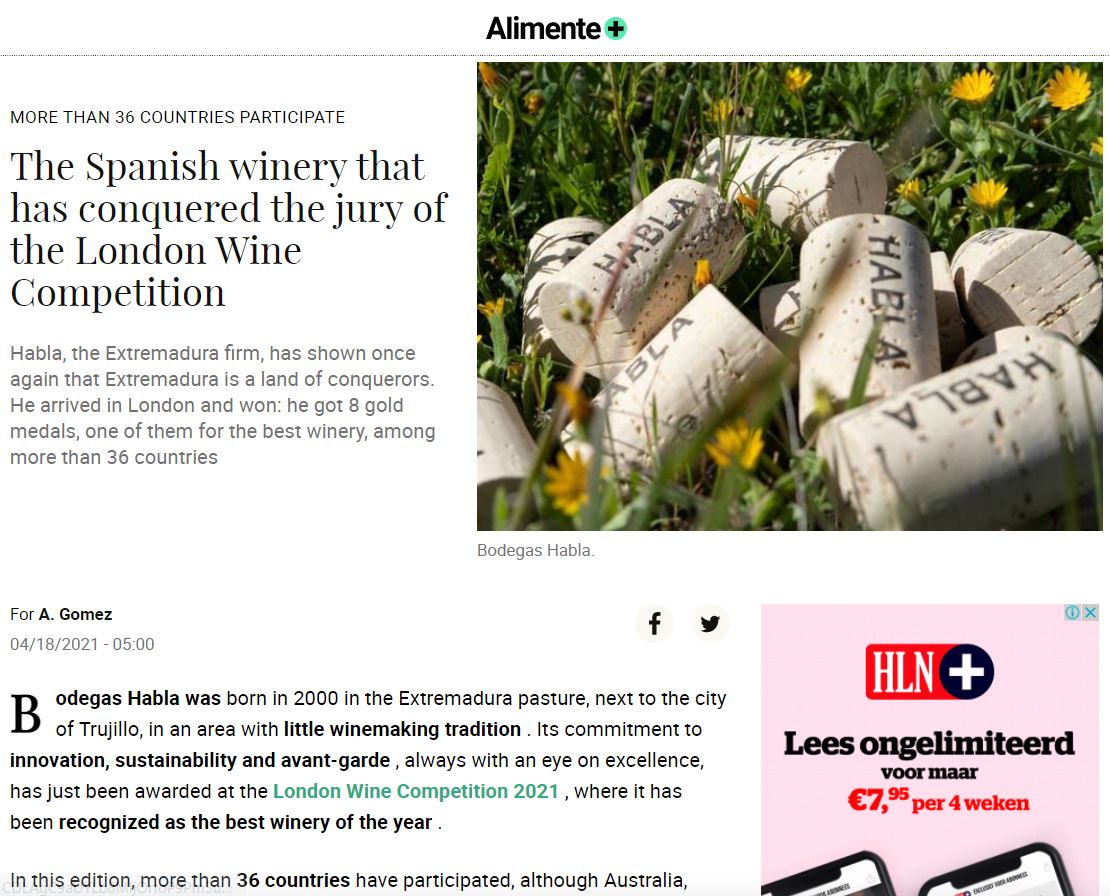 The jury has also awarded Habla Nº22 with three awards: best value for money wine, best tempranillo and best Spanish wine. Habla, the Extremadura firm, has shown once again that Extremadura is a land of conquerors. He arrived in London and won: he got 8 gold medals, one of them for the best winery, among more than 36 countries. 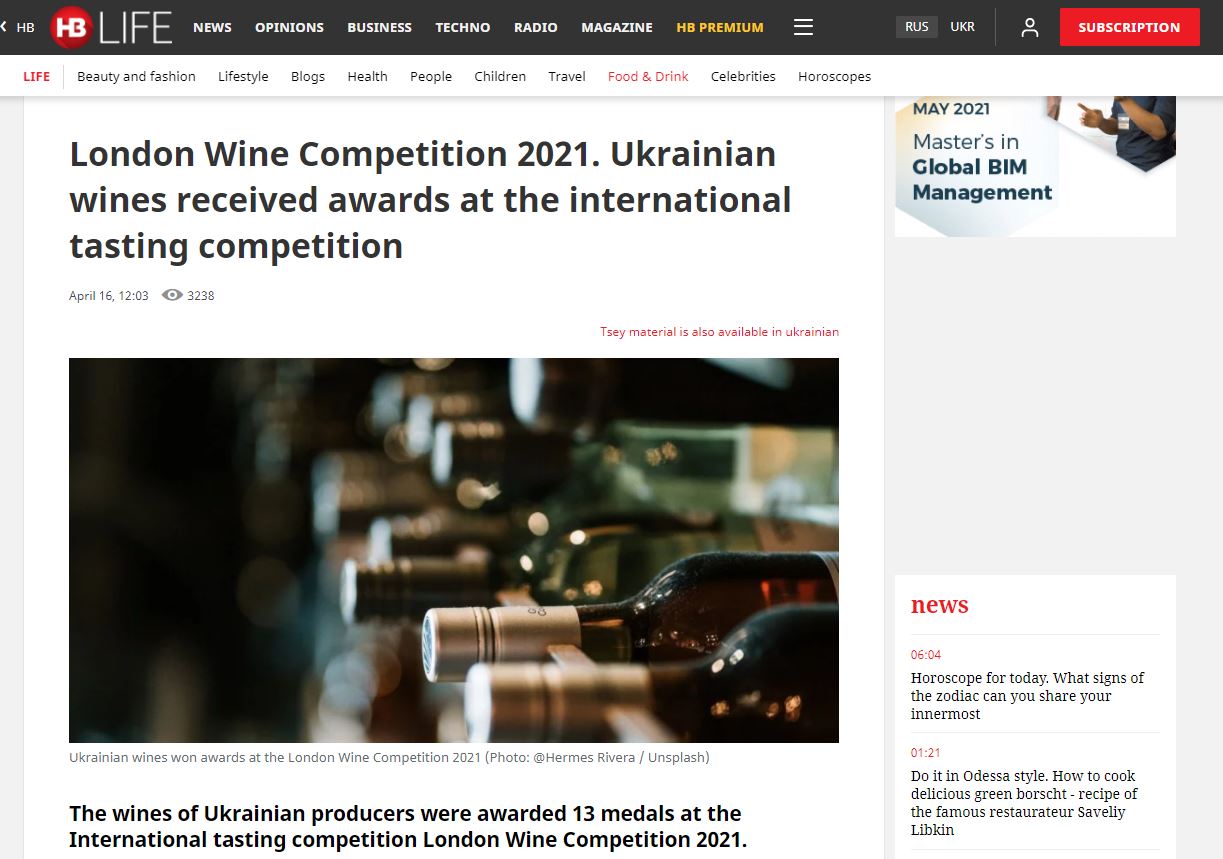 The wines of Ukrainian producers were awarded 13 medals at the International tasting competition London Wine Competition 2021. Wines from three Ukrainian producers 46 Parallel Wine Group, Artwinery and Chateau Chizay received awards at the London Wine Competition. It has been held in the UK since 2017 and is one of the leading international wine competitions, where not only the quality of wines is assessed, but, in particular, the ratio of quality and price. 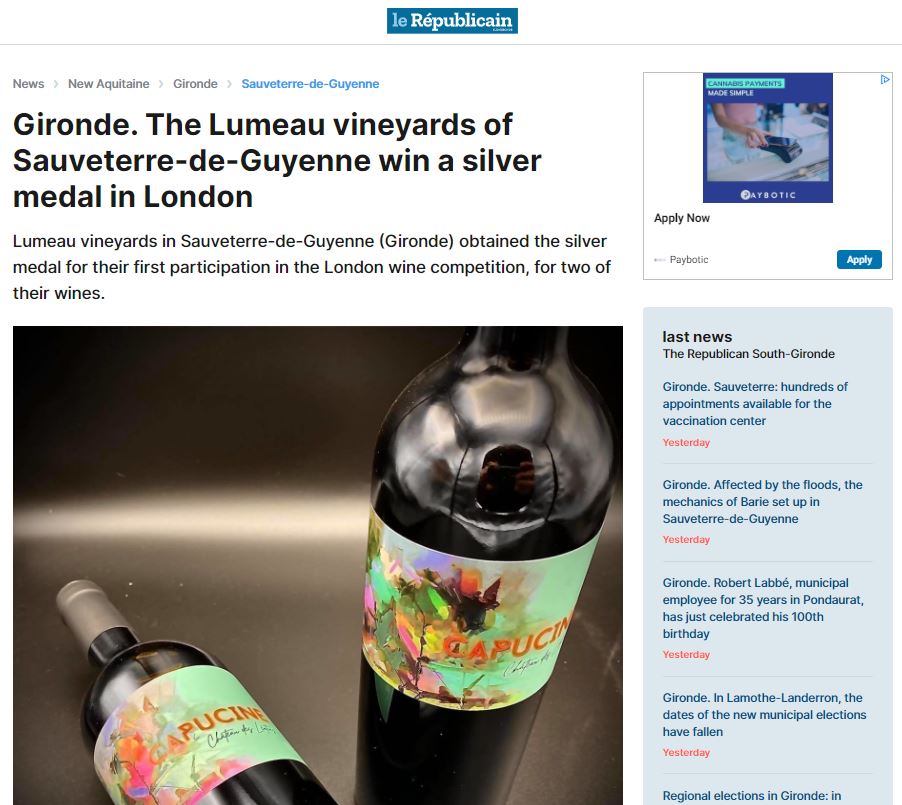 Lumeau vineyards in Sauveterre-de-Guyenne (Gironde) obtained the silver medal for their first participation in the London wine competition, for two of their wines. The jury judged the quality of the wine, the packaging and the value for money. The London Wine Competition aims to reward wine brands in order to promote them. 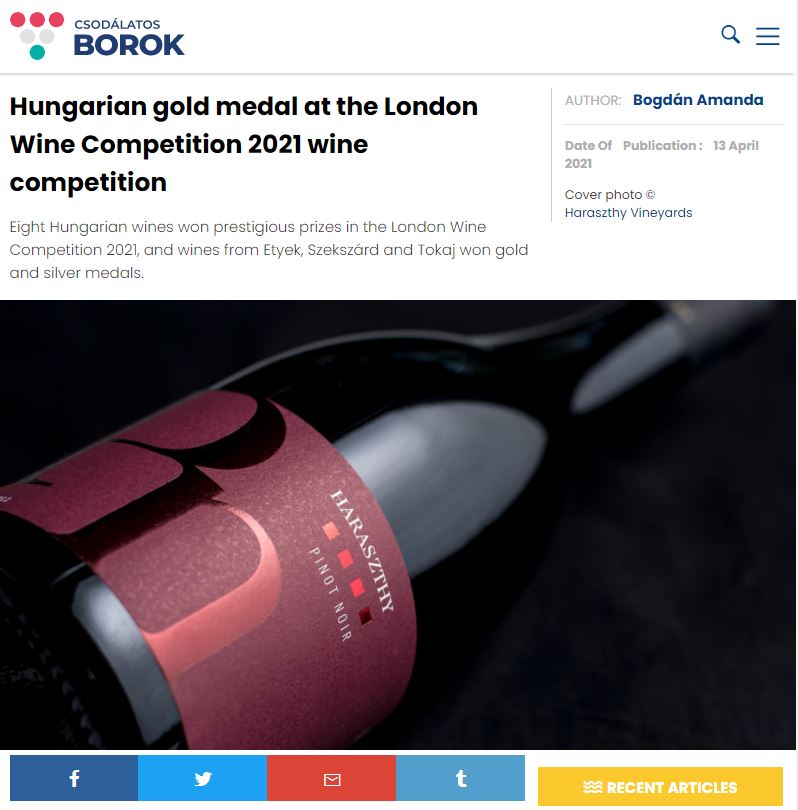 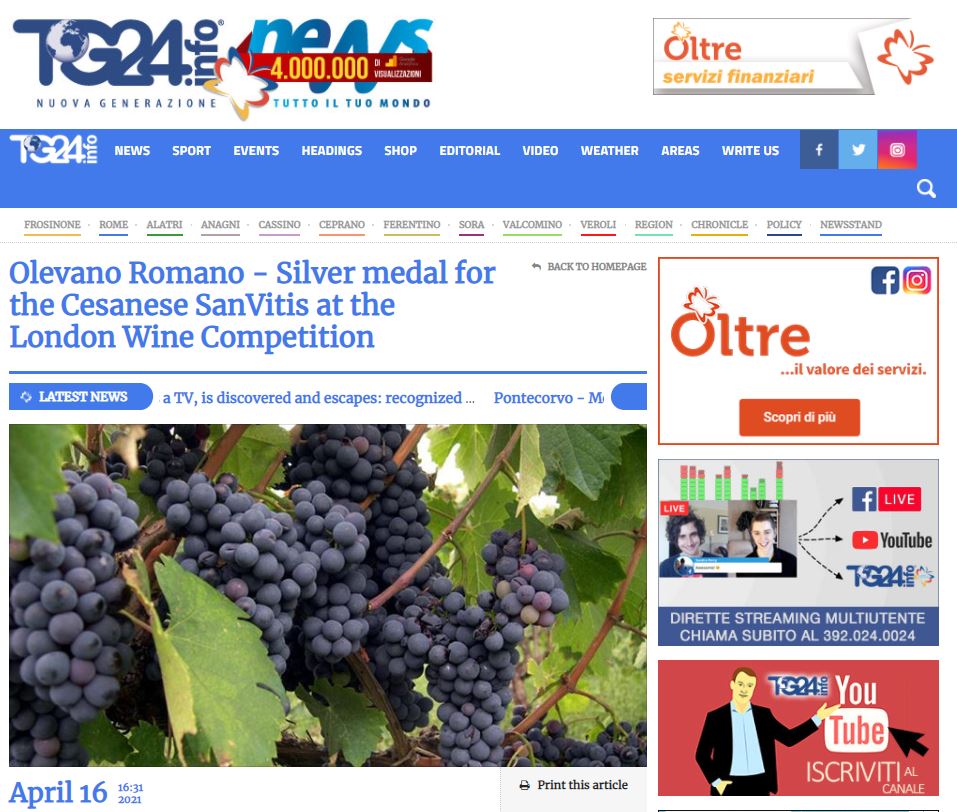 The Cesanese di Olevano Romano Doc 2017 by SanVitis earns a new award, the Silver Medal for the “Lazio red” comes from the London Wine Competition. The Cesanese is the native red grape variety of the most important of Lazio, already present in Latin era. There are two varieties of Cesanese, the common Cesanese, grown mainly in the province of Frosinone and in some areas of the province of Rome, and the Cesanese di Affile, grown in both provinces. 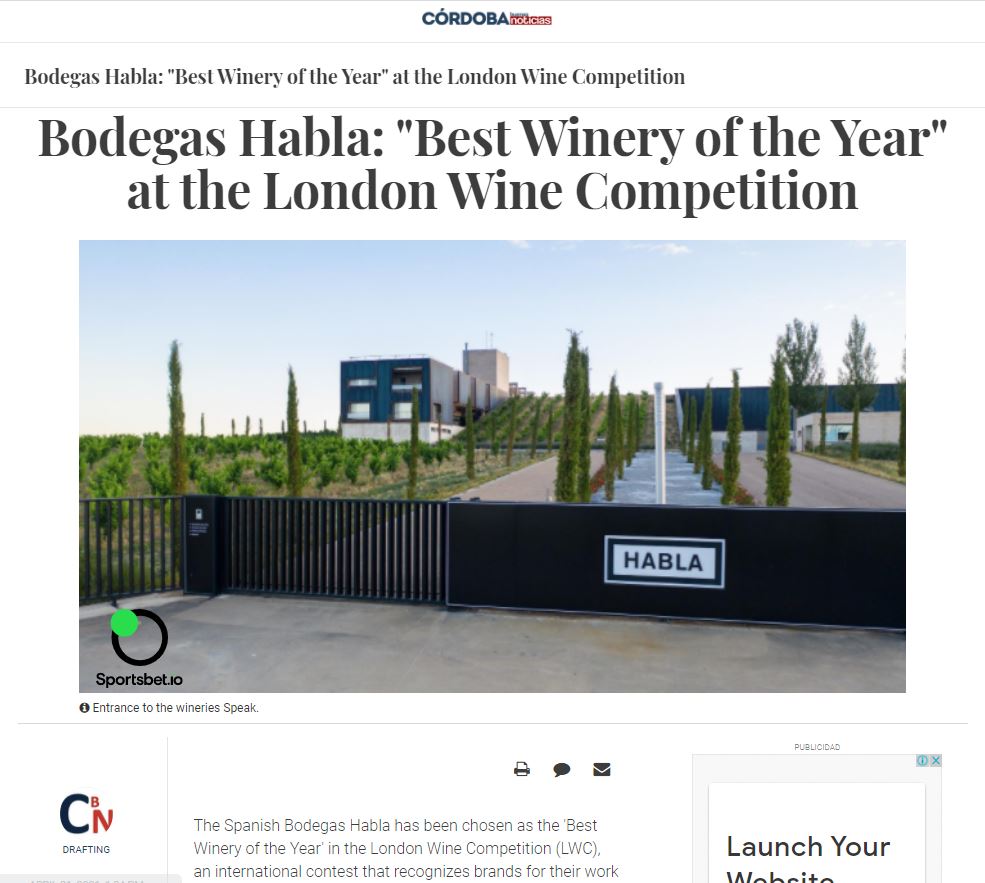 The Spanish Bodegas Habla has been chosen as the 'Best Winery of the Year' in the London Wine Competition (LWC), an international contest that recognizes brands for their work in producing wines with excellent value for money, as reported in a release. The jury, which was made up of 'masters of wine', 'sommeliers' from prestigious London hotels and restaurants and buyers, has taken into account the bottling of each proposal in its assessment, since not only the price and quality of the wine but also the 'packaging'. 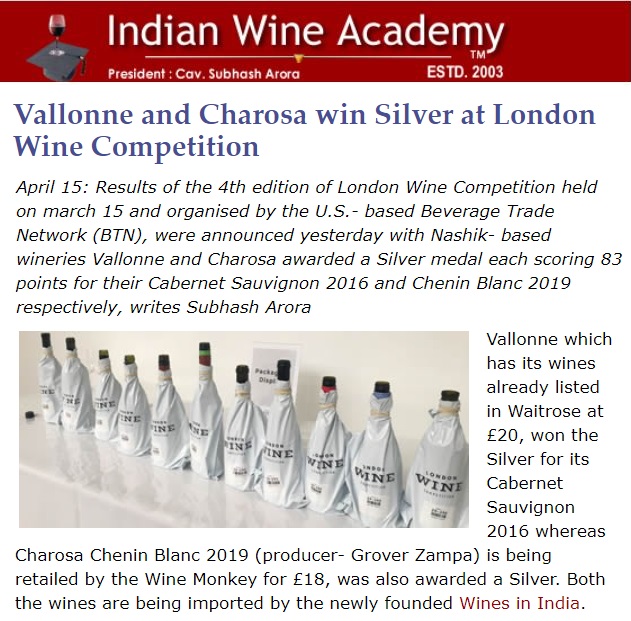 Results of the 4th edition of the London Wine Competition held on March 15 and organised by the U.S.- based Beverage Trade Network (BTN), was announced yesterday with Nashik- based wineries Vallonne and Charosa awarded a Silver medal each scoring 83 points for their Cabernet Sauvignon 2016 and Chenin Blanc 2019 respectively, writes Subhash Arora.

Vallonne which has its wines already listed in Waitrose at £20, won the Silver for its Cabernet Sauvignon 2016 whereas Charosa Chenin Blanc 2019 (producer- Grover Zampa) is being retailed by the Wine Monkey for £18, was also awarded a Silver. Both the wines are being imported by the newly founded Wines in India. Last year H Block Chardonnay scored a Silver too. No Gold has been awarded to any Indian wine at the Competition that debuted in 2018.