What Are the Different Characteristics of UK Multiple Sectors for the Potential Supplier?

Optimising the business opportunity requires a good understanding of the market dynamics at play and the pressures sellers are under.

The opportunities for companies producing and/or supplying alcoholic beverages to sell products in the UK are considerable.

But, then, so is the competition: both for off-trade retail shelf space, and on-trade listings in the nation’s restaurants, hotels, pubs, clubs and bars (the so-called HoReCa market). These two distinct marketplace sectors each come with their own set of characteristics and special dynamics. As such, it really can pay to understand the particular forces in play in order to better focus sales efforts to where the opportunity for the best returns lies.

Selling to The On-Trade

The UK’s on-trade wine and spirit business is significant, amounting to over £10 billion a year: of this figure, £6 billion is spirits and £4.2 billion wines.

For producers and suppliers, the attraction has to be the industry’s sheer scale and volume, but the difficulty is that it tends to be served by a fairly limited supply base, making it more difficult for producer/supplier companies to break into this market sector.

The sector itself suffers from its own stresses and strains, too: pubs are reported to be closing at a rate of 18 a week and some 25% of all pubs have closed since the early 2000s; 2017/18 saw a 24% increase in restaurant insolvencies, the majority independently-owned, and London restaurant closures are said to be the highest for nearly 30 years; on the other hand, one of the few Brexit bonuses is that more Brits are staycationing, and more tourists visiting, to the benefit of the hotel industry and their occupancy rates.

Also, at this time of change, the growth in the availability of wines-by-the-glass has played a part in increasing wine drinking occasions in on-trade situations, with research also showing that the use of larger (250ml) glasses also increase overall consumption.

Producers and suppliers certainly can’t afford to ignore the UK off-trade sector as it represents another £11 billion in sales: £4 billion of which is spirits and £6.6 billion wines.

The sector itself can be divided further into multiple grocers, convenience stores, independents, specialists and ‘hybrids’ (those with premises that provide both on-trade and off-trade services). As with the on-trade, the attraction has to be the sector’s scale and the volume of alcoholic beverages sold.

The volume potential, not to say the kudos of selling to a major chain, is a potent force for any supplier to work to get shelf space. These positives are balanced by certain pressures, however. A retailer’s agenda may not – indeed, it’s almost always unlikely to – match a supplier’s and retailers will always work hard to negotiate on price as much as consistency of quality and supply.

Price pressures are real and can sometimes be damaging. No matter what the reasons – and sometimes it’s due to so-called ‘external forces’, such as changes in currency values or duty increases – retailers will almost always want to maintain both price points and certainly their margins, so defending their (price) position (their price advantage) in order to maintain their consumer appeal in the hugely competitive environment in which they operate.

This has become even more of a battleground with the arrival of ‘disruptive’ discounters Aldi and Lidl (whilst the figures change month on month, Aldi now have around 7.5% and Lidl 5.5% market share). Shoppers know these discounters don’t have the breadth and depth of range that the big retailers have, but they’re willing to accept this in return for lower prices. As a result, both have grown at the expense of Tesco, Sainsbury’s and ASDA because these big retailers struggle to compete on price.

These competition and market forces can work to depress the prices paid to suppliers, and there’s certainly pressure from retailers, even if unspoken, for suppliers to agree. The reality is that it’s actually pretty simple, especially when it comes to wines, to replace one supplier with another (rather less so for well-known spirits brands, although there is always own-label).

Having said that, whilst it could be said that entry-level, or own-label, may have reached the saturation point, and whilst there has been a lot of rationalisation and the removal of duplication from ranges, the big supermarkets are looking at growing their mid-to-premium end. 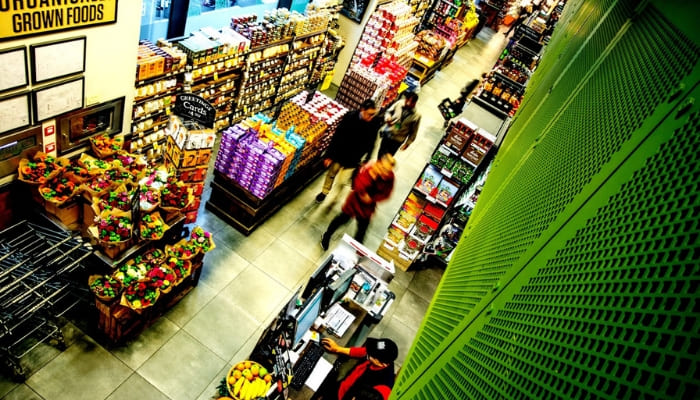 The narrower focus of chains such as Majestic Wines and Oddbins provides consumers with a broader offering and bigger ranges, a reputation for quality products and a level of service from knowledgeable staff, together with the value that’s not a total hostage to price.

As with any high street operation and, indeed, like other multiples, the impact of internet shopping brings the same threat to all bricks & mortar outlets. Whilst some of this can be mitigated by branch improvements to enhance the customer experience, alcoholic beverages can be an easier proposition to build digital sales than general grocery items.

Majestic’s Naked Wines online operation, as one example, has been pro-active in developing an online presence which continues to see year-on-year growth at the same time as retail outlet growth remains fairly flat.

However, it also needs to be said that all retailers with their finger on the pulse are focusing on internet sales and new customer acquisition programmes, and, in spite of huge growth in online selling, they’re all looking at the self-same consumer pound.

Knowledge and service, as well as differentiation – customisation, offering something that’s just that little bit (even intangibly) better than the multiples – is the key to independent retailer success (and the lack, its the strongest threat). Yet, as a sector, the threat of closure remains high due to the marginal nature of some businesses, and the overall trend in recent years in the whole of the UK is one of numbers lost. Other current market factors – rates reviews uncertainty over Brexit, falls in real incomes, changing shopping habits, especially the growth of internet shopping – all conspire to add pressure to the viability of the business.

The clue is in the name: whilst this is a sector where long term relationships can be forged and grow, yet it also presents difficult for producers and suppliers to approach and represents a slow burn in terms of growing business.

The UK is a market that is open, albeit that there are certain alcohol promotion regulations in Scotland. As in other consumer goods sectors, online trading for the wine sector has grown dramatically in the last few years. UK consumers by more wine online than in any other European nation by some distance. Switzerland is reported to be second with less than half of the trade in the UK. With the right operator, there are opportunities in this channel.

Whilst offering scale and growth prospects for alcoholic drinks beverage producers and suppliers, these types of stores are followers, not leaders, without the ‘critical mass’ to act as influencers.

Although still relatively few in number, the growth in these outlets, combining grocery with same-site eating and drinking facilities, can provide all the opportunities that exist with straight on-trade and off-trade outlets. However, as the majority are independent traders, they’re not as easy to target as when part of a group. It also has to be remembered that, whilst some pressures can be mitigated by the combining of trading formats, it can just as easily be said, and certainly for the producer and supplier, that they also possess all the pressures that we’ve already outlined for these two trading sectors.

The article is contributed by Alistair Morrell, Wine Inspector, wine industry consultant, journalist and, commentator. Over 30 years as a wine business professional, Alistair shares his global knowledge, network, and experience of growers, importers, distributors, and buyers.